The most difficult part of writing is allocating the time to actually sit down and write. Initially, Louise motivated me to take the time. She loved to see me sit down and write a post.  She would do dishes, straighten up the RV, read a book, or just go to bed while I wrote. It was the whipped cream and the cherry on the sundae. Now that I spend much of my time traveling alone, at the end of the day, I’m tired. When I do travel with someone or caravan with friends, I like to spend the evening enjoying their company. I tell people that I’ve been too busy having fun to write. It’s true, but as I refine my traveling, I tend to spend the hour or two to other things. I recently replaced the 1990’s TV with a smart TV. I enjoy it after a long day, but it’s a time suck. Not writing is a bad habit I’m determined to shake. I enjoy writing. I’ve been told I’m good at it, and it helps me re-live my travels.

END_OF_DOCUMENT_TOKEN_TO_BE_REPLACED 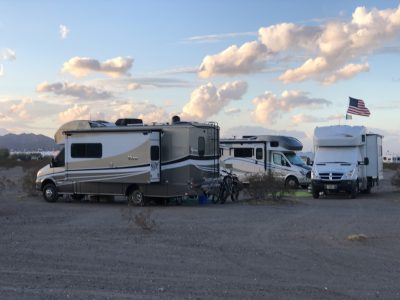 I’ve been traveling since December, just before New Years 2021, with the intention to recreate as much of a magical 2020 as I could. Last year, there were a number of great rallies scheduled for people who have the same type of RV as I do. It was my goal to be at them all. In the attempt, I visited twenty five states and traveled about 22,000 miles. I started in January, and by the time everyone was sitting up in March and actually taking notice of Covid, I’d attended the first three rallies;  Quartzsite, AZ, in January, Paso Robles, CA in February, and Tallahassee, FL in March. Everything came to a shuddering halt in March. Thereafter, all the rallies were canceled. END_OF_DOCUMENT_TOKEN_TO_BE_REPLACED We’re at Canyon Village right now, and with Internet connections being nonexistent most of the places we’ve been since we arrived at Yellowstone, I figure I take this opportunity to make a quick post. END_OF_DOCUMENT_TOKEN_TO_BE_REPLACED

We arrived at Yellowstone at about 8 AM. We still touring, but I figured I’d put in a quick post while I could. Enjoy the photos. END_OF_DOCUMENT_TOKEN_TO_BE_REPLACED

I woke up at 6:00 AM with great intentions to do some writing. It had rained for the majority of the night, so the earth of the group campsite we were occupying was the consistency of lard. Sticky, greasy, nasty. I was looking for a place to set up and write, as the picnic bench was very unsuitable, when the guy from the next campground, John, walked over. He’s in between consulting gigs. He decided to take some time off between consultations. The last gig was a very successful consulting job, and he decided that he needed to take a look at the world before the next one. It was a great wandering conversation, filled with stories about each of our lives. Told with respect, illuminating, no braggadocio, snippets of achievements we were proud of in an effort to describe our individual lives. Suffice it to say, that after reaching an agreement, I would trust him with everything I own. A spiritual man, possibly religious, but nothing on his sleeve, everything in his actions. END_OF_DOCUMENT_TOKEN_TO_BE_REPLACED