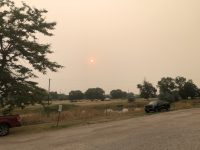 The most difficult part of writing is allocating the time to actually sit down and write. Initially, Louise motivated me to take the time. She loved to see me sit down and write a post.  She would do dishes, straighten up the RV, read a book, or just go to bed while I wrote. It was the whipped cream and the cherry on the sundae. Now that I spend much of my time traveling alone, at the end of the day, I’m tired. When I do travel with someone or caravan with friends, I like to spend the evening enjoying their company. I tell people that I’ve been too busy having fun to write. It’s true, but as I refine my traveling, I tend to spend the hour or two to other things. I recently replaced the 1990’s TV with a smart TV. I enjoy it after a long day, but it’s a time suck. Not writing is a bad habit I’m determined to shake. I enjoy writing. I’ve been told I’m good at it, and it helps me re-live my travels.

This trip I’ve started writing several posts, all on paper. I’ll do my best to finish them and post them, but as the Chinese say, “The longest journey begins with the first step”, or something like that. Getting started is the first step.

Yesterday started looking like the end of the world. I was in Guernsey, WY, near Fort Laramie, and I woke up early, but it was darker than I thought it should have been. There had been some thunderstorms the previous evening, and I thought it would clear out the haze from the day before. The sun was a giant red orb, hanging low in the sky. The sky was a milky, dark grayish white. I learned that there are significant fires to the west of me. The destination for the day was Thermopolis, WY, and I had no stops on the way planned, so it was a leisurely morning. I talked briefly to two travelers with indeterminate plans and stops. One of them, who had been a dairy farmer, said “Well, you know after fifty years of working, it’s nice to do this.”

I stopped at the Post Office to mail postcards and a package and was greeted by a man who looked old enough to have helped in the settlement of Wyoming. We had a cordial, polite conversation, and on the way in a lady greeted me with a real “Good Morning”. It was a pleasure to be in such a friendly place. 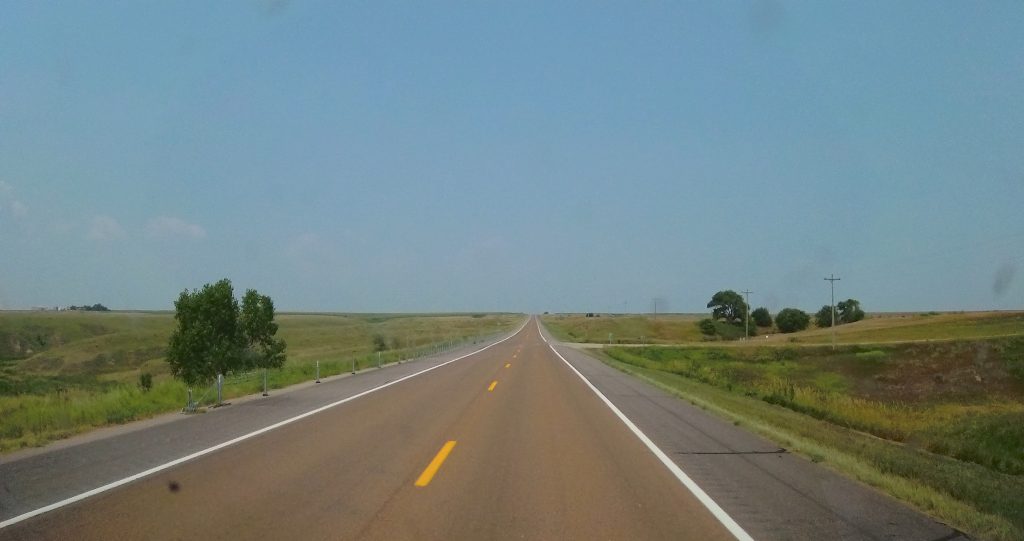 Geography still matters in some places of the world. I’ve been traveling in a portion of the US where there is not a fast food restaurants on every corner. Occasionally, you will see a Subway, Dairy Queen or a Pizza Hut, but they are the exception. Unfortunately, many of the towns I’ve been through aren’t there any longer. They have a name, a few people remain, but the town is gone. The hardware store, grocery, auto repair shop, hairdresser, bar, restaurant have all closed. Often a significant number of houses are uninhabited. Tall grass, desiccated bushes and untrimmed trees attest to the duration they have been vacant. In Texas, it seems that no matter how small the town there is a family owned or run doughnut shop. I definitely need no more doughnuts, but the idea was that if I saw one I would test the quality. Wyoming is not Texas. Doughnut shops do not abide on the route I traveled.

I’ve never been through this portion of Wyoming. It was an easy route, taking RT 26 to I 25 to back on RT 26. The landscape initially was wet and filled with alfalfa fields, corn fields and hat fields. The closer I got to Thermopolis, the drier the landscape became. The air was filled with smoke, and there was a nasty cross wind of about 20 miles per hour, with occasional gusts of thirty. I drive a rolling barn door, so driving was not fun. The RV has been modifies so it drives really well, normally, but after two hours of keeping the RV between the yellow lines, my shoulders hurt. Casper was a typical American town. Plenty of Corporate stores, just about every chain restaurant and chain retailer. It was the first time I’ve been to Casper WY; I’ve been to Casper a thousand times. There may have been a frontier soul to Casper, but I didn’t see any signs of its existence, and if there is, it was buried by modern commerce. The next town I passed through Shoshoni, a relatively large town by Wyoming standards. In Shoshoni, he main intersection of RT 26 had four gas stations. Three were closed/abandoned. I’m used to something being in between towns elsewhere. Hamlets that may or may not have a name, clusters of houses, businesses or factories, stuck in the middle of nowhere. Petroleum processing facilities, orchards, something. Wyoming has miles and miles of miles and miles. The map indicates that passed through at least for towns in the 100 miles between Casper and Shoshoni. Twenty houses collectively make up four towns hereabouts. I felt like I was in an old movie where the background is on a large screen that rolls by to make it look like movement. It was beautiful, but in a gritty way. 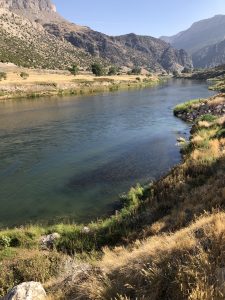 They’ve dammed the Wind River, and the lake behind the dam is huge. The canyon the river cut is spectacular. I don’t know how I missed this before. Both the canyon and the river is well worth the effort to get here. It is the equal to some of the most beautiful canyons I’ve seen. I decided that although I was exhausted, I didn’t come this far to sit in the campground in the heat and take a snooze. I drove into Thermopolis to see what it has to offer. It is a tourist town. Tuber rentals, White water rafting companies, motels, restaurants, liquor stores, fishing guides, anything a tourist would want or need. I noticed big signs for the Wyoming Dinosaur Center on Carter Ranch Road. I like dinosaurs and geology (go figure) and I headed that way.

The Center is located at the edge of town in a large pole building. The collection of dinosaurs is impressive as they have both reproductions of compete dinosaurs and fossils they have excavated. The presentation of the skeletons is excellent and although I thought the lighting left much to be desired, the place is actually quite dark, the lighting on selected specimens is excellent. The specimens they have on display are some of the best I’ve seen.  Touring the museum was made difficult by the fact that I’m pretty familiar with the subject and I didn’t come across any revelatory information, combined with the fact that I was totally exhausted. I purchased a dig site visit along with admission. For less that $15 it was a deal, and the dig site visit is the first dig site I’ve been to. It was a small tour there were only five of us on the last tour of the day. A family of four from Michigan, and me. The tour was run by an intern studying in Idaho, who has changed his major to Geology, poor man. He was an excellent tour guide, filled with enthusiasm and a fire for learning and field work. He said that he really enjoys field work. I’m not sure that the reality of doing field work and eating has blossomed, but he’s a smart man, and I’m sure it will. It was very cool to see bones in siutu, and the sediments at this site, part of the Morrison formation were part of a sandy river bottom or swamp. Predators, prey, passing herbaceous dinosaurs all passed through, repeatedly, before the site was covered and preserved. I’m glad I don’t have to put that puzzle together. 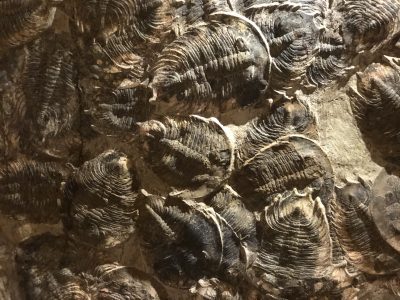 I’m not sure if I was tired, or the canyon has an optical illusion, but on the way back to the campground, it seemed like I was driving downhill. The ride seemed shorter and less steep than on the way into Thermopolis, and I found my space for the evening. I made a dinner of leftovers, got settled and at 8:30PM decided to cal it a night as I was falling asleep sitting up. 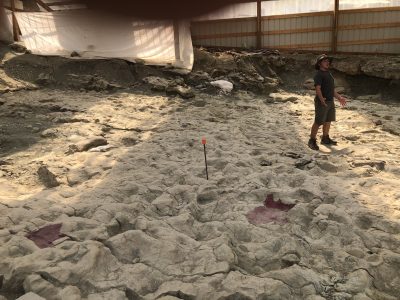 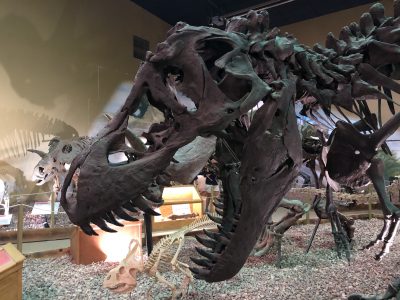 As I sit and write this I look out over at the Wind River and the canyon its cut over the millennia. The central portion of the campground is irrigated and is green and lush. The side with the river view is dusty with dried grass, just like the rest of Wyoming I drove through yesterday. I have the view though. Mourning doves come and go, and Magpies in their black and while outfits, the egg smugglers, patrol the campground. There is little noise from the highway, and thankfully, there have been no freight rains, as I’m directly across the canyon from a heavy freight line. The morning is quiet and cool. It’s 66 degrees this morning, a very pleasant change from the 90 degree temperature yesterday afternoon. 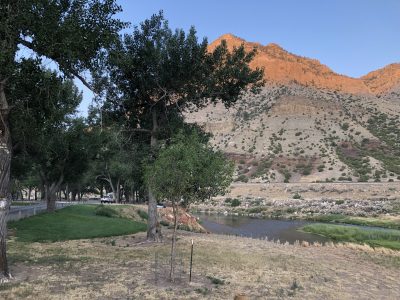 The plan for today is to see what Thermopolis has to offer. There is a State Park that has hot pools. I have a swimming suit. The Dinosaur Center has been checked off the list. There is always a grocery store to visit, and fresh vegetables to buy. There is a river, and a with a quick check looking into the river just below my campsite, some of the biggest fish I’ve ever seen, and I have both a pole, and more importantly, a Wyoming fishing license.  I’ve wanted to visit Thermopolis since 1972, and especially since 2017 when I had an idea that it would be a good place to see the total eclipse. Adventure awaits!

2 thoughts on “Wyoming, Thermopolis and the Blog”