I’m not sure where the summer went. It was challenging on a number of levels, but good things happened. When I left New Jersey to head out to the Albuquerque Balloon Fiesta, (scheduled for October 1), on Friday, September 16, I wasn’t really prepared either mentally or organizationally. When I left NJ, the RV had been cleaned (floors cabinets polished, carpet shampooed) and most of the cabinets had been examined and those things I haven’t used in a while were removed. The vibe at leaving was that not everything was as organized as I wanted, or that there wasn’t a state of being that I was comfortable with.

Typically, as seems a rule in life, some things that I use frequently were also removed. Either I’ll do without, or purchase. Travel over the last year and a half had been far too rushed, deadline driven, and hurried. . I’ve covered too much ground in too little time in the past, and with this adventure planned having a leisurely pace, so far, the trip has been excellent. With the goal of having the first portion of the trip free from schedule, I planned on staying at the first RV friendly rest stop on the westbound Ohio Turnpike. This meant that I had no time that I HAD to leave NJ, as there was no time limit on y arrival at the rest stop. Arrival at 6PM or 11PM made no difference. There would be no locked gate on the camping spot.

I think I travel alone, but this fellow Murphy (No relation to Margery) seems to tag along. It was warm. (Isn’t September supposed to be a ‘Lets get out the sweaters month?”). The AC Unit on the RV didn’t seem to want to start. The compressor was reluctant. After a few rests and tries, cool conditions reigned.

The first stop on the trip was in the Dayton area to see my friend Margery Murphy. Margery and I have known each other for at least fourteen years. She was originally a sales rep when I was working with computers. She was, and is, an excellent sales rep. I would place my order and then chat. She was very supportive while Louise was ill and then dying. She called me weekly to see how I was doing, and always seemed to know what questions to ask, and what ones not to. A wonderful, sweet woman. I’m lucky to have her as a friend. 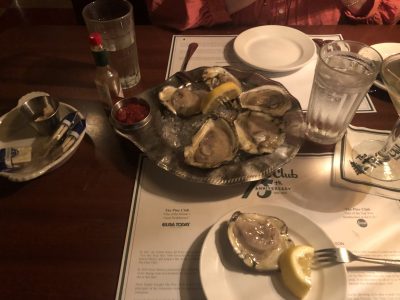 Louise and I were out to visit her twice before Louise could no longer travel, and then every time I was in the area, I would try to stop by to say hello. The effort was reciprocal. She her Mom and Aunt stopped by for lunch on their way to New England. Good Times. Sometime in 2019, Dan Becker and I scheduled a trip to the Air Force Museum in Dayton. I asked Margery for a recommendation of a good restaurant with the intent that the three of us would have a nice dinner. She mentioned the Pine Club, and a tradition was born. There a re no reservations. They only accept cash, or will open a house account, and the establishment has not substantially changed since 1947. If you are in Dayton, eat there. The dinner at the Pine Club was exceptional as expected. 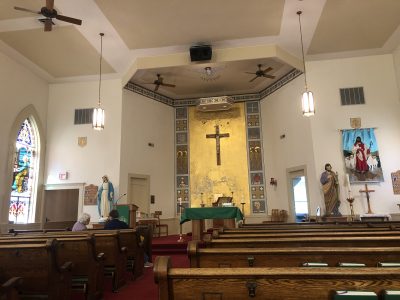 Spending time with a good friend is the best of times. On Sunday we went to St Paul’s RC Church in Yellow Springs. Yellow Springs is the home of Oberlin College and to say that the town is interesting is an understatement. Margery is in St Paul’s choir. I had a wonderful time, as their Choir Director rearranged the music in the key of Bob. I had a conversation with the Choir Director after Mass, and she said that generally, the music was written for a prepubescent boy’s choir. She wants the entire congregation to sing, so it was re-arranged into a lower key. The choir was excellent, and I had a great time singing well, for the first time in a while. 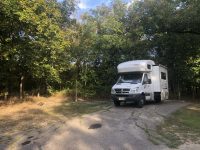 I left Dayton, and spent two leisurely days of arriving in very nice county parks, and getting the RV to where I was happy with the way things were arranged. The driver’s door broke well before the start o the trip, and in repairing the door, I discovered that the speaker in the driver’s door was blown out. I bought new speakers, installed them, and the speakers in the door didn’t work. They were repaired in Prairie Creek County Park, a park in the Vigo County Park system. Louise and I had been there twice once in 2014 and again in 2016. The park has been improved since then, and I had to move my RV early on check out day, as the electrical system was being redone for the first time since it was installed twenty five years ago. It was peculiar to be there without her. As if they knew, the campground hosts came over to say hello, a hello that lasted for overt an hour until it got dark. They were both really nice people. The conversation was refreshing. .

It was a long, lonely drive across Illinois. The scenery was all corn fields, soybean fields and dead ash trees, the latter apparently killed by the Emerald Ash borer. A shame. I was tired when I arrived at the camp ground, and went to bed very early, still on East Coast time. I woke up before dawn, cleaned up, had breakfast, took a shower I was on the road by 8 o’clock headed off to the Truman Museum. Very unusual. 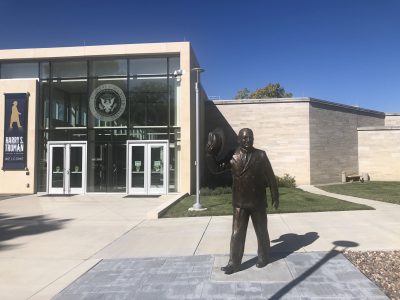 I arrived at the Truman Presidential Library at around 10AM. The last time I was there was in 1973, and the place bore no resemblance to what is there now. The one object I was looking forward to seeing again was a brass model of the USS Missouri, which was used for radio studies when the ship was being built. It was not there. The docents told me that they did not own the brass model, and that the ship model was located in the Missouri State House. Life. The one thing I wanted to see. 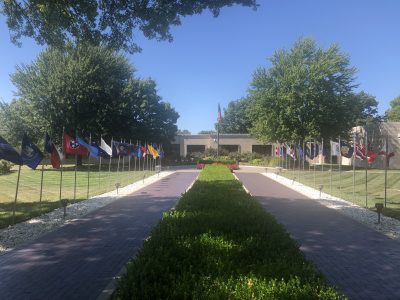 There was no such revelation today at the Truman Library. There are no revelations or surprising facts, but it does make me believe the Truman was an astute politician. He was a political wolf in every man’s clothing. He was deeply involved in the Missouri Democratic Machine, and just anecdotal information makes me feel that although Truman promoted the idea that he was squeaky clean, he continued relationships with individuals who were enmeshed in political skullduggery. 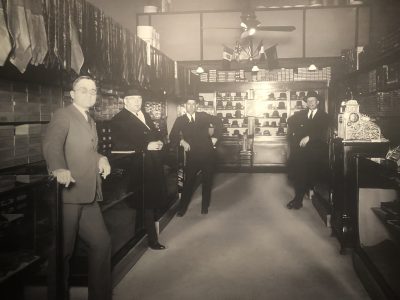 Truman and the Democratic Party Boss

If there is any insight into the past, it’s the rationale for making him Vice President during the 1944 presidential election. The people that put him there knew he would be President, and I believe they put him there for a reason. In the Library, one of the more telling photos is Truman standing in his haberdashery with Tom Prendergast and two of Mr. Pendergrass thugs. The photo resonates with me. Fair haired Truman on the left, the bosses on the right. Innocence and raw brazen power. I was surprised that the museum didn’t emphasize more of Truman’s groundbreaking work on desegregation, and the expansion of Roosevelt’s Social Security. There was no illumination on how Truman supported himself after election. The docents indicated that he drew a salary from running his Library, and an internet article opined that Truman somehow made money while President, and was not as destitute as he portrayed himself. (https://en.wikipedia.org/wiki/Harry_S._Truman#Financial_situation )

I happened to be standing at the docent counter, when a visitor asked if there was a good barbecue place around. I wasn’t planning on Barbeque, but only a fool will pass up a good place to eat, and when the Lady Secretary chimed in that the barbeque was good, I was sold. I received instructions and off I went. The name is forgettable. “A Little BBQ Joint” is the name. I walked into a mostly rehabbed auto repair garage. The decorations were counters places on car chassis parts. I would have taken some pictures while I was waiting, but there was a couple to my right finishing their lunch, and the Bob Kelly “A stranger is someone that you haven’t talked to yet; then they’re a friend” kicked in. 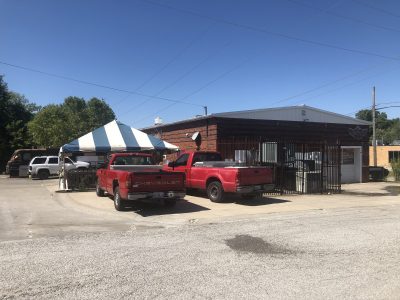 It turned out that the fellow at the counter was a retired Army colonel who had been, at one point, the Provost Marshall of the Presidio back in the day. It was a very interesting, very lively political conversation that I immensely enjoyed. I asked him what he recommended, as he seemed to be a regular. He recommended the ribs, beans and potato salad. He was spot on, on all three selections, and generally I’m not a fan of potato salad. We had been talking for 15 or 20 minutes, and he flagged one of the waitresses for me. They must have thought we were old friends catching up. It was one of the better conversations I’ve had with someone in a while. The barbecue, it turned out, was excellent, and just added to the day.

I tasted a little BBQ in the RV. It was hot and I wasn’t especially hungry, so I took off for the campground I was spending the night at. I had to check to see where I was going. It’s been a very relaxed trip. On my way there, I passed Poppy’s Doughnuts and Bakery. It was a non-chain place, and looked like there was a big step between the street and the interior. The normal sitting area had been closed during Covid and apparently never reopened. There were a number of plants in varying states of health. The selection was thin. I was there too late in the day. The lady who was there indicated that she was closing in a minute or two. I never have problem with what I want at a doughnut shop, so I ordered a glazed doughnut and a jelly doughnut. My friend Robert Oakman and I ‘test’ the quality of doughnut places, and surprisingly, Poppy’s is in the running for one of the top three doughnut places I’ve ever visited. The doughnuts were as good as Goldfields in Yuma, and the jelly doughnut was the best I’ve ever had. 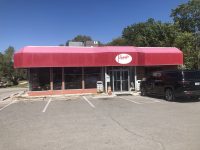 Tomorrow, it’s off to Sand Hills State Park, a visit with a friend, some more BBQ and preparations for the Rally I’m hosting at the park. Life is good!