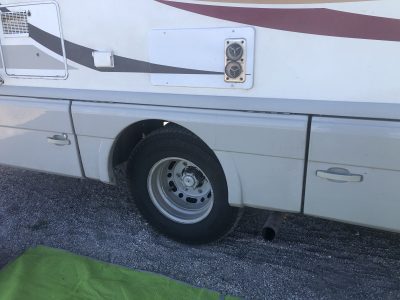 I spent the first half of yesterday working on a five minute project. I’ve been looking at a panel on the RV that covers the rear wheels, near a cargo drawer, that was out of alignment. The panel stuck in a couple of inches. I’m not sure when I first noticed that the panel wasn’t properly aligned, but I’ve been practicing doing nothing, and someone told me that we’d done enough nothing for the week. They continued that if we did too much more nothing, there wouldn’t be enough nothing to do, next week, so I decided to do something. My friend Al said “One of the problems  is that you never really know when you’re finished doing nothing.”. Smart man.

I had high hopes for a quick job. Fool! Cried the fates. The lower portion of the RV has panels that raise, storage panels and fascia panels. All are attached with metal supports. I looked at the support framework, and saw that one of the metal supports was no longer attached to the fiberglass fascia panel. East fix. The lower support for the panel was bent. Still an easy fix. The horizontal support piece was twisted like a pretzel. Well, not good, but we can manage. Then I noticed a long vertical piece of metal that supported the exhaust pipe. It was twisted, and the clamp for the exhaust pipe was improperly installed. There were several large dents in the exhaust where it appeared that the mechanic had forcefully attempted to attach the pipe.

A little background into my exhaust pipe problems is in order. Several years ago, I had the RV in storage. The RV storage place has high fences and video cameras. Unfortunately, it also has a large water detention basin, located to the rear of my RV, and the gap is several feet high between the fence at the far side of the basin and the ground. Some thief entered the facility and cut off my catalytic converter. Repairs were expensive. Insurance paid for most of it, but left me with a large cash outflow, that could otherwise have been used for flowers for Louise, good beer, and excellent dinners at restaurants, with no dishes to wash. I had the repairs done at Caldwell MB, who at this point have firmly cemented their reputation as pirates, who take an inordinate amount of money for dubious, shoddy work, that occasionally qualifies as a marginal repair.

I thought, that since the bill was only a little smaller than the national debt, or the total of most kids college loans, the work was done correctly. Silly man! Fortunately I’m with friends, and Ed Kuebler, an excellent mechanic, was there to assist. The tail pipe wasn’t firmly seated in the other exhaust pipe, and the clamp was on wrong, so after some discussion, breath holding, and copious amounts of WD40, we removed the tailpipe. Ed is an expert. The removal and replacement went without a problem. Assorted rocks and a grill were used as an anvil, my axe was the hammer, and everything was straightened to an acceptable standard (for the middle of the desert).

I know that I carry too much stuff, but I had everything to make the repair. I had all the tools, drill bits, screws, adhesive tape, cleaning solution and rags I needed. It was satisfying to fix the RV. I could not have done it without Ed. Tools are good; friends are the best. After everything was completed, cleaned, and all the tools were put away, I started to think about what happened.

I went to someone who presented themselves as qualified to complete a repair. I paid then a significant amount of money to do a job that I assumed would be done correctly, and without inflicting any damage to the RV. I assumed that if, on the off chance they damaged my machine, they would own up to what happened. Instead, they took the money, did shoddy work, and inflicted damage that, depending upon who did the repair, had a cost of either hundreds or thousands of dollars to repair. I trusted them, and I should not have. That made me think about trust in society. It made me realize that trust is becoming a scarce commodity in our world, and people seem to be complacent about it. “Well, you should have been more careful.”; “Well, what did you expect?”; “You really expected them to work that hard?”; “What do you mean it’s not ready? You told me that it would be!”; “Gee, look at that, the can is the one pound size, but there is only ten ounces in it.”; “The picture shows a big pile of bacon on it, but there is only a half a piece.”. These are all comments you’ve heard, or made yourself. There is an old expression “The buyer beware.”. Folks, that expression is born from the fact that people have been untrustworthy for a long time. The difference is, that people seem more accepting of it than ever before.

I grew up in a German Irish neighborhood. I grew up with the concept that things should be “Just so.” German engineering was the best, because if it was designed to be within a thousandth of an inch, it was accurate to a thousandth of an inch. If the butcher promised something, it was everything he promised. Your word was your bond. If you didn’t meet your obligations, you were distained. We rely on others in a civil society all the time. You rely on a person stopping at a stop sign and yielding to traffic. You rely on cars slowing for you or stopping when you cross a crosswalk. You rely on someone not to turn in front of you suddenly. You rely on the supermarket to sell unadulterated food. You rely on the barber to be skilled, keep their tools clean, and not to slice off part of an ear. You rely on people to be civil.

I’m not sure how I will personally address the decreasing importance of trust in society. As we approach a state where everything is acceptable, where everything is allowable, where no personable responsibility is either expected or required, and where an attitude of “The universe orbits around me” and others accept that attitude, there will be some very unpleasant surprises in our future.